Telosa- the proposed 'utopian' city to be build in USA, soon!

Telosa- the proposed 'utopian' city to be build in USA, soon! 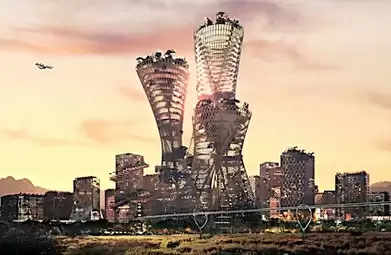 The United States of America is getting a whole new city from scratch! Yes, you read that correctly. The billionaire and ex-Walmart executive Marc Lore has recently revealed his plan to build a new woke city in America, which can house around 5 million people.

Marc, who is the former CEO and President of Walmart, has planned to name the new American city "Telosa". Telosa draws its name from the Greek word telos, which means “greater purpose” or goal. Marc aims to build a new place for everyone, with the best features of some of the world's best parts. He is all set to go about his plan; all that he needs is funding worth $400 billion and a huge plot of land for the development of Telosa.

Besides, Marc has already taken a step ahead to the cause as he has hired Bjarke Ingels Group (BIG), the world-renowned architectural firm, to design the city of Telosa. However, the place and the exact location for the settlement of this new city have not been decided yet. But the billionaire is looking for a suitable area in certain locations, including Nevada, Utah, Idaho, Arizona, Texas, and the Appalachian region. The initial plan towards the establishment of Telosa is to start with a 1500 acre to build a 50,000 resident city, and then further build it from out there.

The website for the city of Telosa is already up and running, which stated that people, or should we rather say the residents, will be able to move to the city by 2030. As described by the official website, this new city from scratch is an establishment that avoids the issues related to the legacy infrastructure and policies that restrict the possibility of what can be built.

Project Telosa has put the needs of the public at the center, looking to pursue a city that is not only resilient but also sustainable. Certainly, along the way, it will serve as a model for the residents who live in the existing city to adopt the same values.

However, as positive and utopic as the project may sound, it has strictly clarified that they are not aiming to create a new Utopia. Utopia signifies perfection, and the developer has stated that they are not looking to establish an idealistic place. Telosa, on the other hand, is going to be a private place, which will be made accessible for everyone. Reality and possibility are the two things that Marc Lore's project believes in.

As they stated via the website, the city of Telosa is focused on being the best and the most sustainable infrastructure solution, along with achieving urban design, city services, and a vibrant economy. With the realization of the fact that there is no perfect solution and that there are flaws in every human system, Telosa does not promise Utopia.

But the aim is much bigger than that, which is to be committed to bringing up new ideas for the development of the city and people, constant improvement, and thinking of sustainable and suitable ways to deal with all the problems that may arise during the process and afterward.

Telosa, the initiative taken by Marc Lore, believes that there are several reasons why people would be willing to the new sustainable city. The project has promised to give its citizens the opportunity to get good jobs, adequate education, higher quality, and a new way of life. Calling Telosa the "blueprint of future," the website also didn't fail to mention the advantages of a vibrant, exciting, and sustainable city for its future residents.

The project aims to offer its visitors and residents an experience of mobility of the next generation, a world-class education with the motive to shape the future, and the newest innovation in the industry, along with a unique cultural environment and entertainment.

People have raised questions regarding the impact of this new establishment on the environment, which is currently suffering badly due to human activities. Many fear that the construction of a whole new city from scratch will add to the misery of nature and the environment. However, Telosa has an action planned for that as well.

The project is committed to being fulfilled with a model which will describe the best way to incorporate the existing natural environment in the design and operation of the city. The entire plan is based on the aim of maintaining the air quality of the region.

Telosa will tackle the air quality issues by not allowing fossil-fuel vehicles and will make zero stack emissions a requirement. The upcoming city is also focusing on minimizing the city's heat-island impact and following a green infrastructure throughout the construction.

The initiative has also announced that it will establish a fund for the restoration of critical habitats and preservation of the region's natural resources, which will be chosen for the establishment from the potential locations.

Certainly, Telosa plans to live by its aim of a sustainable city, for the welfare of the people of the country and the environment and all other natural factors. Telosa indeed is going to the future for American citizens.